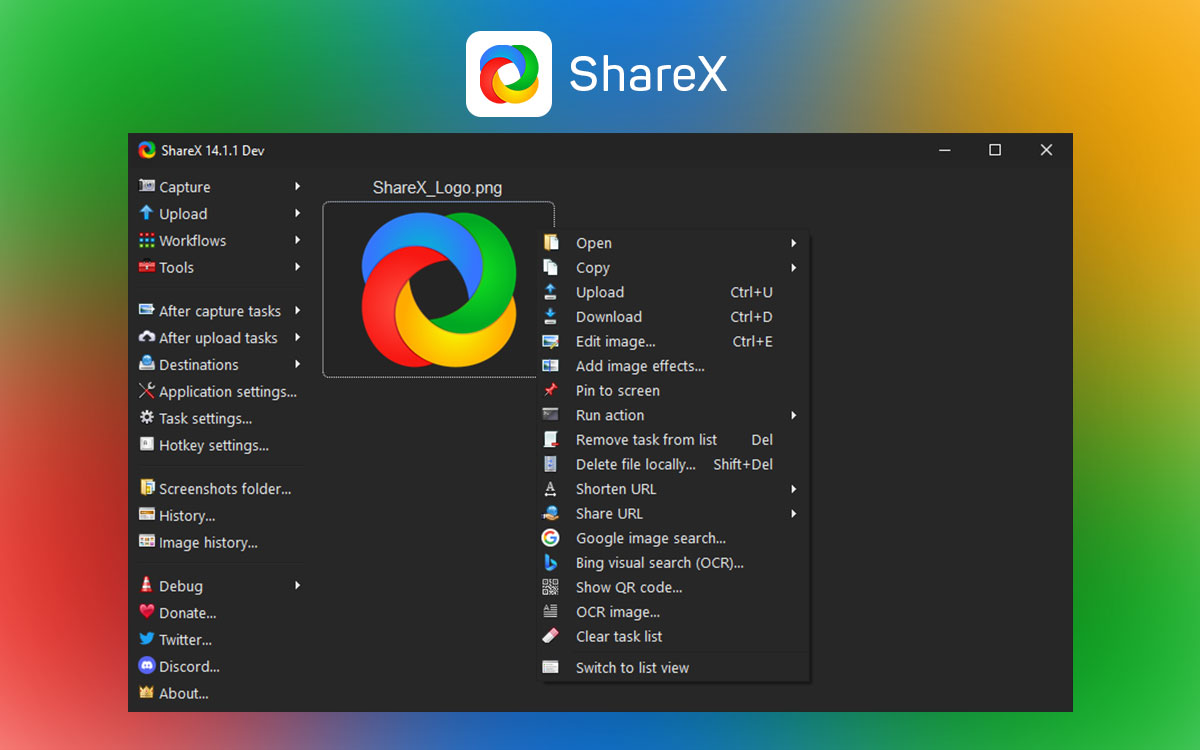 Screenshots are probably the best way you can communicate or demonstrate things across. And while Windows Snipping Tool is capable enough of capturing screenshots, it lacks certain features that some other screen capture tools have. In this post, we will review ShareX, considered one of the best Screen Capture Tools.

What is ShareX for Windows?

ShareX is one of the best screen capture and recording software available. The best part is that it is freely available and is open source. It can also help you record GIFs, videos, and files, provided you have FFmpeg. After capturing the screen, you can annotate the screen capture using a variety of tools. One of the notable aspects of ShareX is that you can use the image editor to draw on the top of your desktop or window before taking a screenshot. It also lets you upload images, folders, text, and other files to over 50 destinations.

Jaex and Michael Delpach developed ShareX. It originally started as a project called ZScreen in 2007, and in 2010 a parallel project called ZUploader began with the aim to rewrite ZScreen’s core from scratch. ZScreen’s features were later brought into ZUploader, which was later repackaged into ShareX.

Why Should You Choose ShareX for Windows?

ShareX is a feature-rich screen capture tool that offers loads of features not offered by the Windows Snipping Tool. For instance, it has an image editor with the help of which you can quickly annotate your screenshots, an intuitive color palette, OCR capabilities, the ability to record screens, and so much more. Plus, you get all the features free of cost. Another reason you may want to choose ShareX is the number of upload options available. You can upload your screen captures and recordings online, on image hosting platforms, and even on social media.

ShareX takes screen capture to the next level by letting you automate everyday tasks. Although you are a beginner, you may not want to get into automation instantly; you can streamline your work manifold times by sticking around. For example, you can set something as basic as uploading a screenshot to a specific location on your computer, or you can configure settings so that the screenshot you have captured will open in the image editor so that you can go ahead with the image editing tasks only.

You could also consider some of the other best alternatives for ShareX.

How To Install and Use ShareX?

ShareX is a simple-to-use screen capture software. Here we will give you an overview of how you can capture and even record activities on the screen. You can delve deeper and explore ShareX even more – 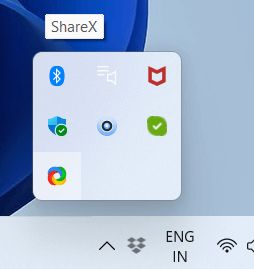 3. Let’s assume you want to capture a complete website. For the same, you can use ShareX’s scrolling capture. For this, click on the arrow next to Capture and select Scrolling capture. 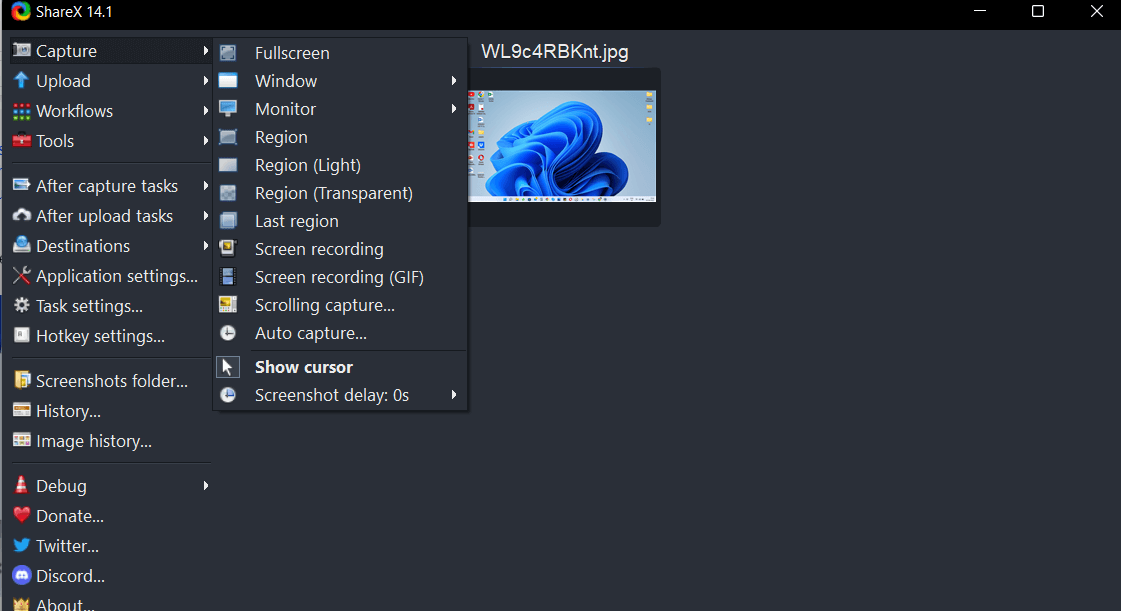 4. You will be asked whether you want to capture a particular window or a desired region. Select an option and then click on Start scrolling capture. 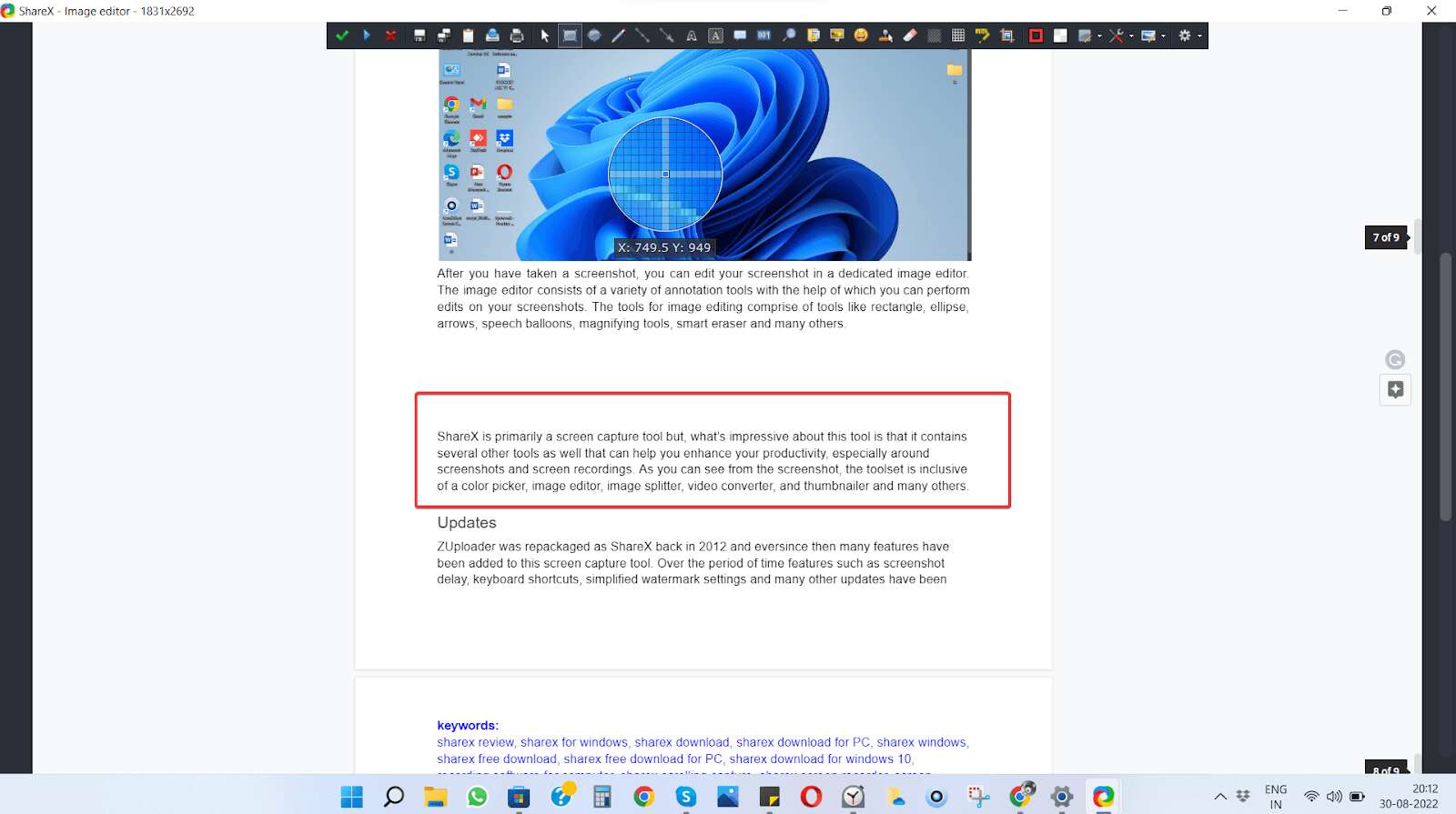 No doubt ShareX is a decent screen capture and screen recording tool and acts as a legit alternative to Windows’ Snipping Tool. Talking of the interface, you can find most of the options pertaining to capture, upload, and their respective settings on the left-hand side. And the resultant images or preview of the photos can be seen on the right-hand side. 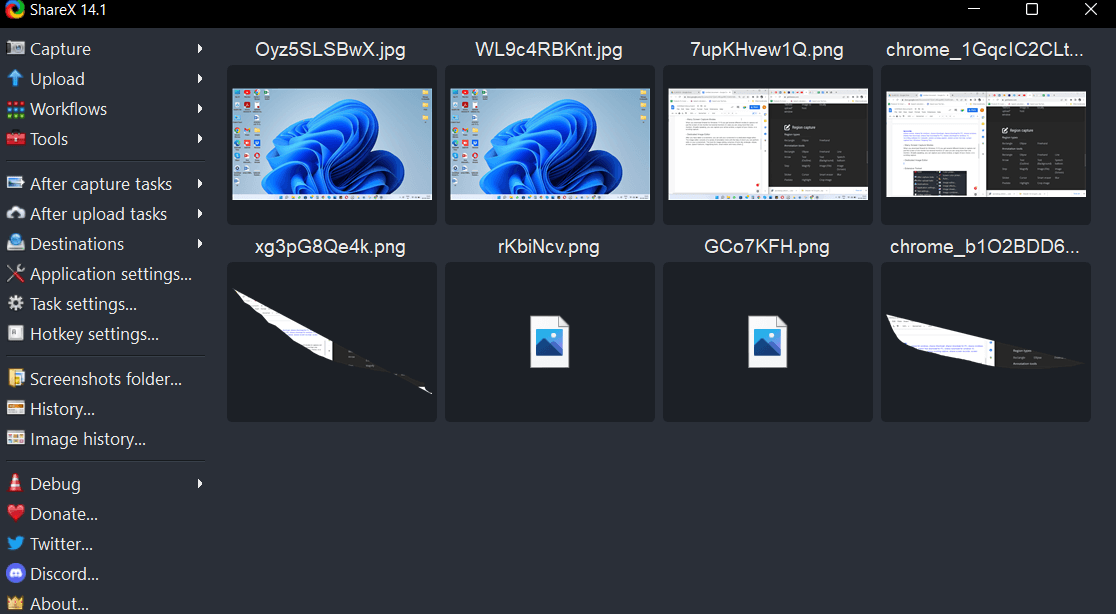 Most options have an arrow key, clicking on which you will find the associated options. Consider the example of Workflow. You can easily refer to the shortcuts for the various captured modes by clicking on the workflows. 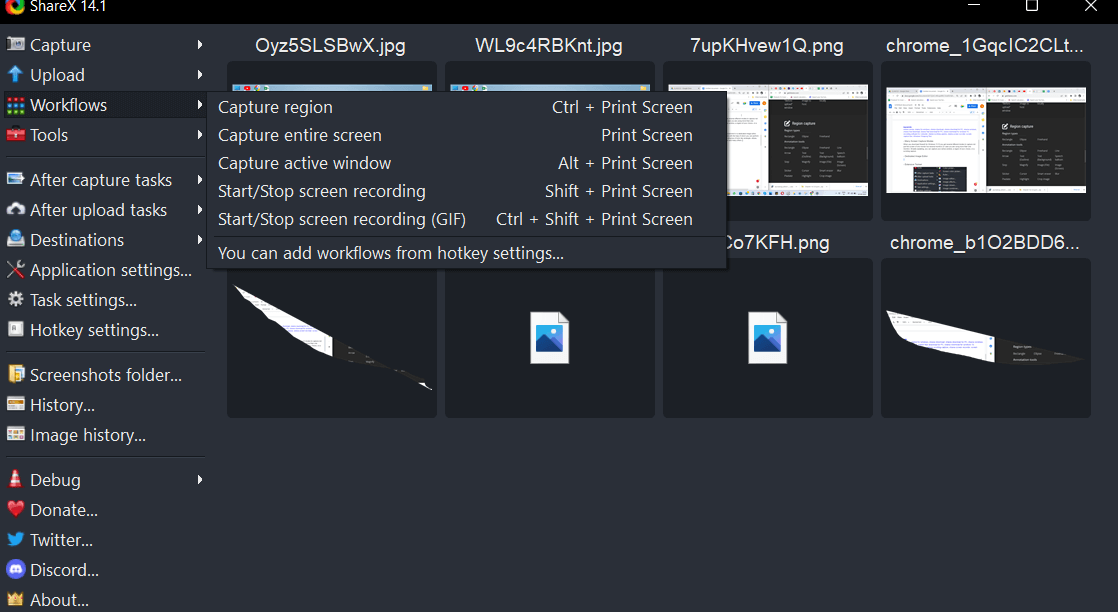 When you compare it with a tool like TweakShot Screen Capture, where all the functions are available right in front, you will have to spend some time getting accustomed to shortcuts or performing other configuration settings. Apart from that, most functions are easy to understand. On a basic level, you can use the tools easily to capture the desired region of your PC or upload them to the destination of your choice.

In terms of customizability, ShareX has a lot to offer. For instance, you can customize hotkeys for a variety of functions, and you can even automate tasks as well. 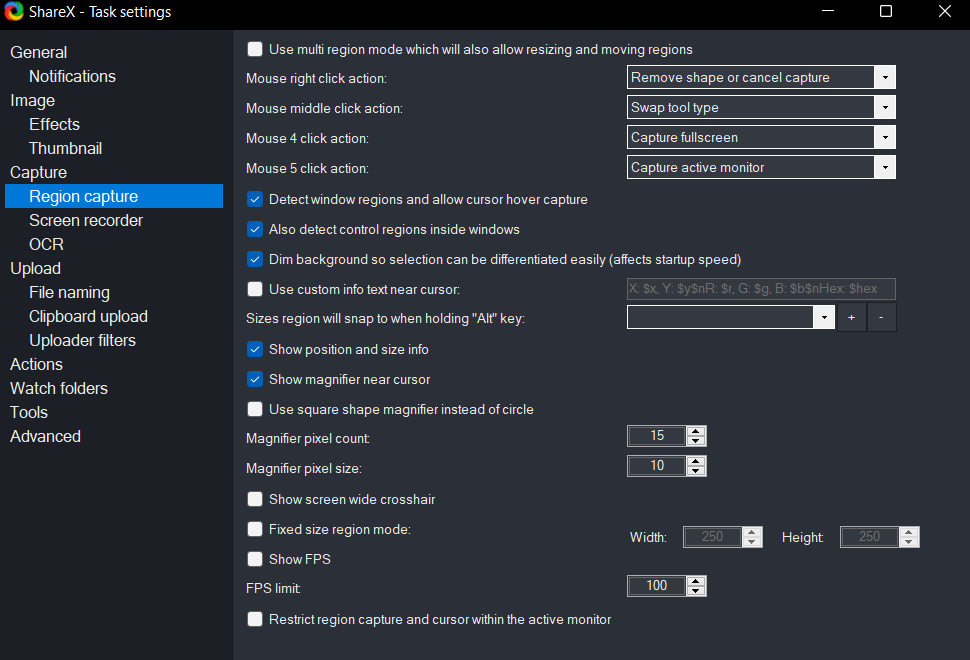 ShareX is both a screen capture as well as a screen recording tool. This means while you have many options to capture your screen, you can even choose settings to record the activities on your screen. You can customize the FPS, change audio and video codecs, etc. As for taking screen captures, ShareX lets you capture pixel-perfect screenshots. 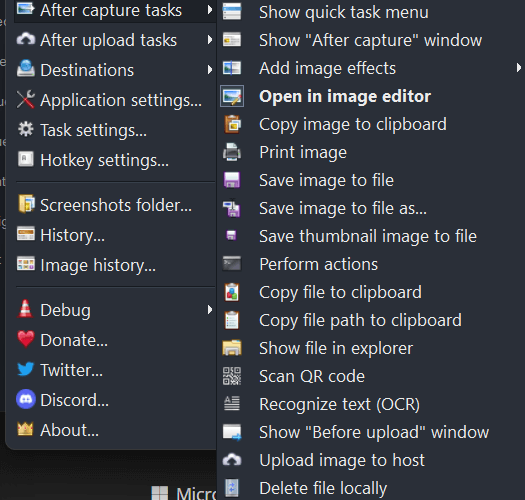 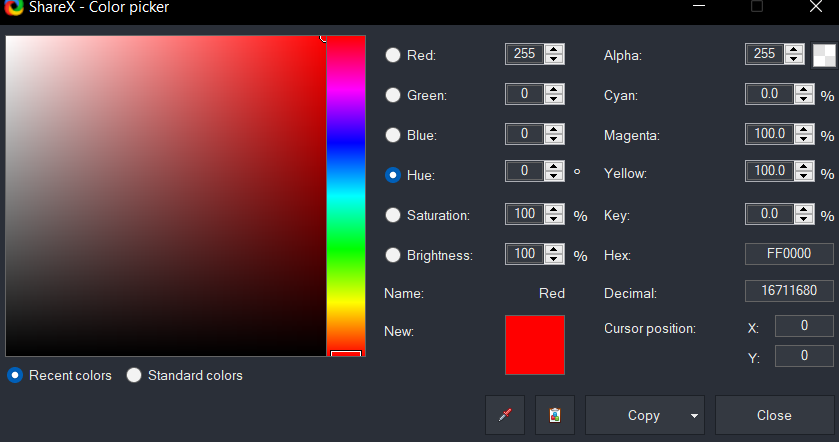 Not many screenshot capture tools offer a color palette like ShareX. The color palette is broadly classified into Recent colors and Standard colors. At the outset, you can move the color picker slider and choose the color of your choice. Furthermore, several settings can help you select the exact color you want. Apart from choosing a color from the palette, you can click on the dropper icon and choose the color from any window on your desktop. 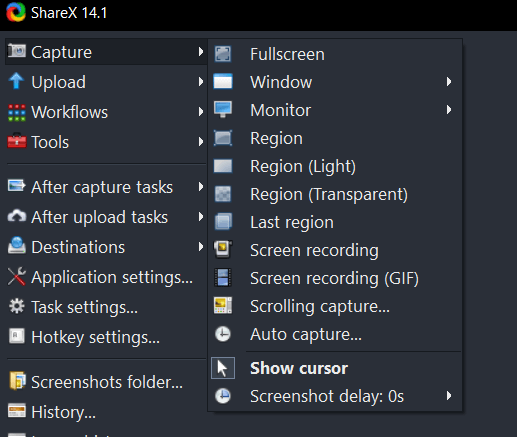 When you download ShareX for Windows 11/10, you get several different modes to capture not just the screen of one monitor but several monitors (in case you are using more than one monitor). You can capture your active window, a region of your choice, or a scrolling capture. 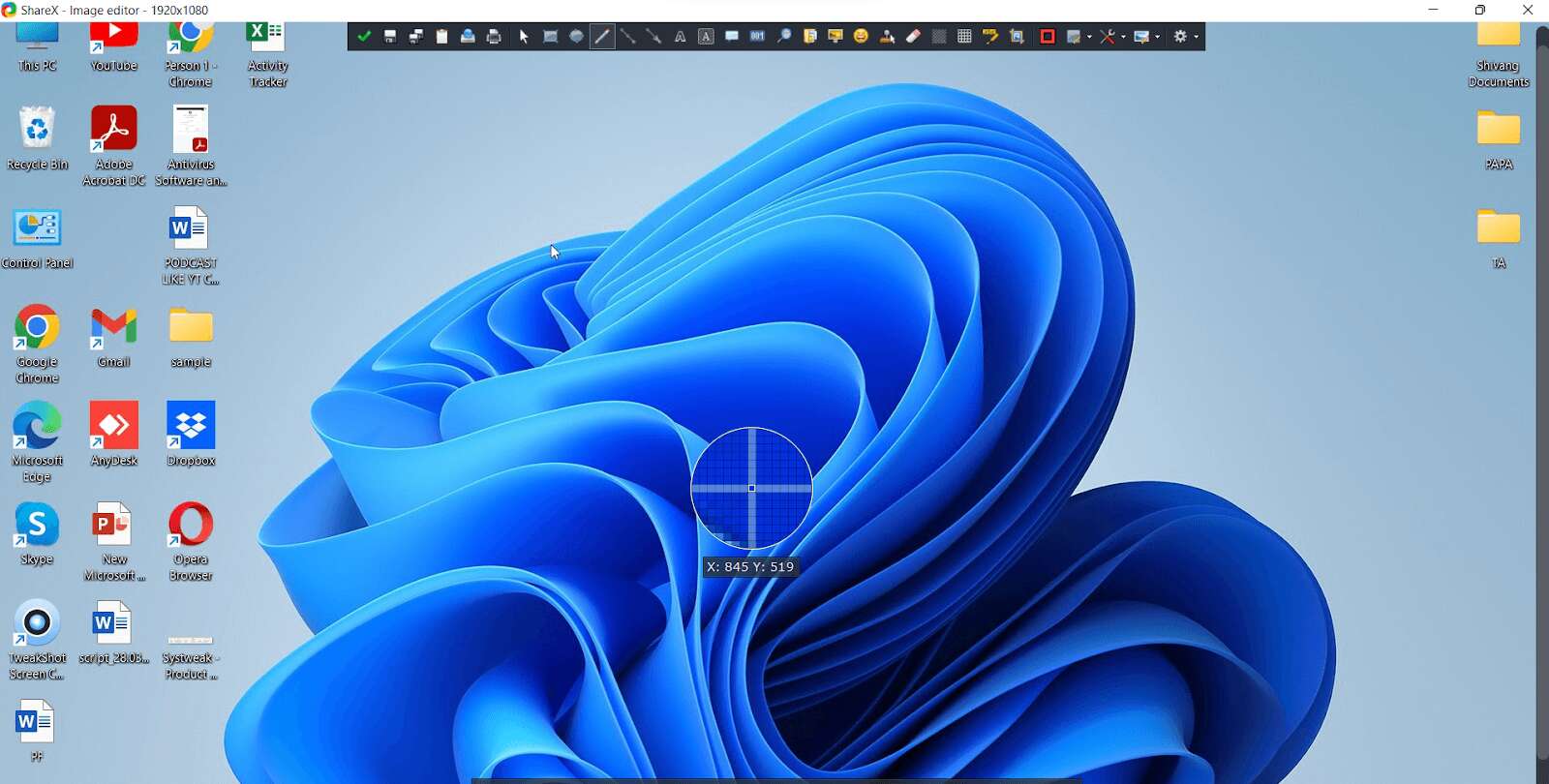 After you have taken a screenshot, you can edit your screenshot in a dedicated image editor. The image editor consists of a variety of annotation tools, with the help of which you can perform edits on your screenshots. The image editing tools comprise tools like a highlighter, shapes – rectangle, ellipse, etc., arrows, speech balloons, magnifying tools, smart erasers, and many others. 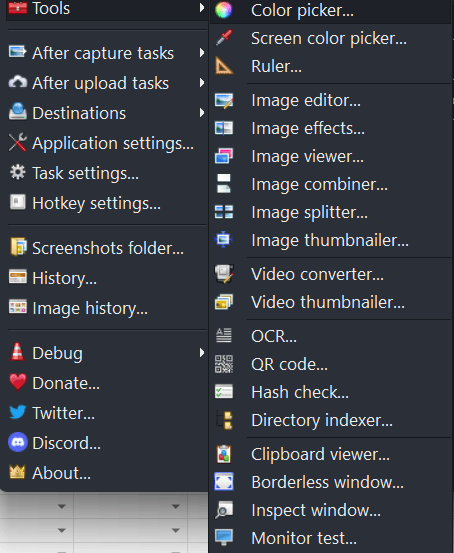 ShareX is primarily a screen capture tool, but what’s impressive about this tool is that it contains several other tools that can help you enhance your productivity, especially around screenshots and screen recordings as you can see from the screenshot, the toolset inclusive of a color picker, image editor, image splitter, video converter, thumbnail, and many others.

ZUploader was repackaged as ShareX in 2012, and since then, many features have been added to this screen capture tool. Over the period, features such as screenshot delay, keyboard shortcuts, simplified watermark settings, and many other updates have been done to the tool. The screen recorder has become more efficient and feature-rich over some time. Through every update, developers have fixed bugs as well.

As mentioned above, ShareX is an open-source and free screen capture tool.

ShareX is considered a fast and smooth screen capture and recording tool. Whether it is capturing screenshots or working as a recording software for a computer, ShareX poses no issues. Coming to the uploading part, the speed at which a file is uploaded to the various platforms would depend on the file size and the edits being made. 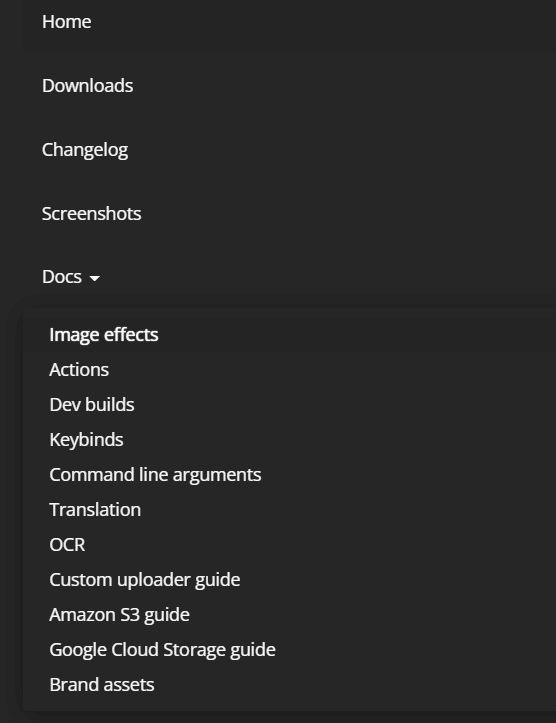 Since ShareX is free and open source, there is no dedicated customer support team, but that doesn’t mean that you can’t get your query resolved as a user. If you face any issues regarding ShareX, you can raise a new issue on GitHub or refer to the doc section, where you can get tutorials on most aspects of ShareX.

Q1. Is ShareX Safe and secure?

Yes, ShareX is safe and secure. You should always install it from Microsoft Store or the ShareX website. After installation, it wasn’t flagged off as malware by Windows Security or any third-party Antivirus program.

Q2. What Is Better Than ShareX?

Looking for an alternative for ShareX, you can opt for TweakShot Screen Capture, one of the best screen capture tools available. It is simpler to use as compared to ShareX.

Greenshot is a legit screen capture tool that comes packed with a variety of features. It is more powerful than Windows’ Snipping Tool. After you have captured a screen, you can save it and send it to various places

Keeping aside a small learning curve that might overwhelm beginners, ShareX is a decent screen capture tool and considering that it is available free of cost, it is worth giving a try. It comes with several features and ease of use, and owing to the same, a user can efficiently deliver screen captures. ShareX also doubles up as a great recording software for your computer. 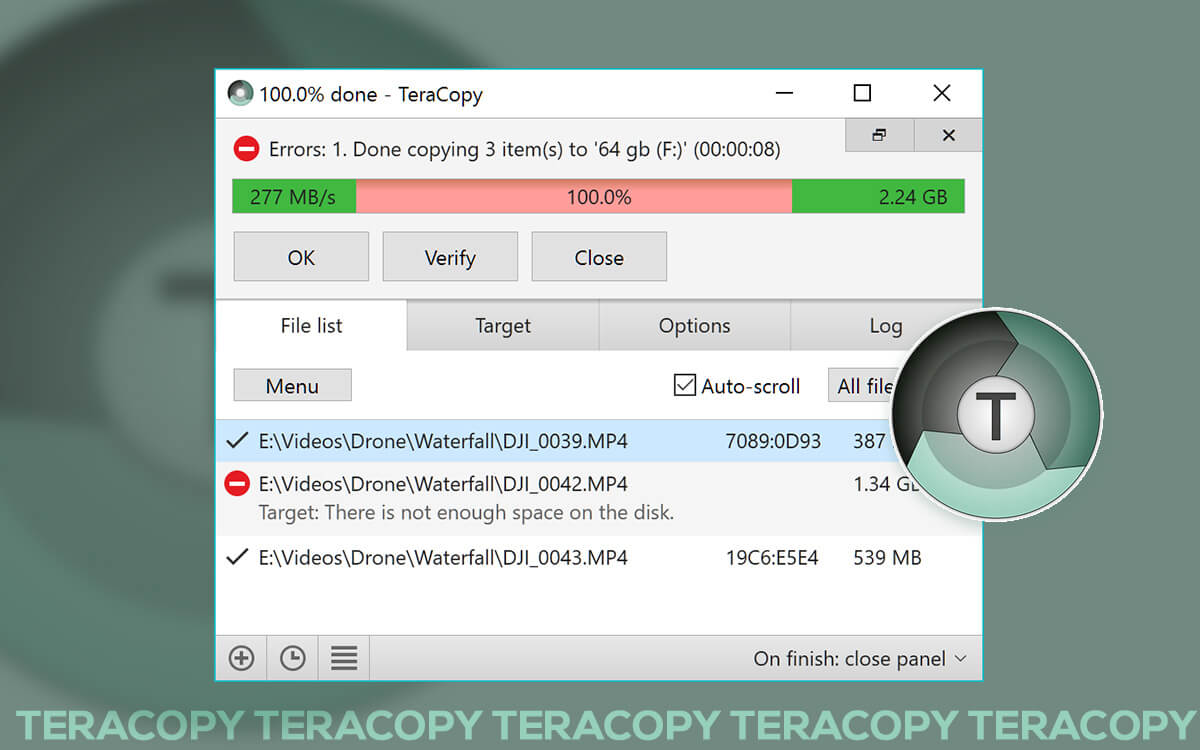 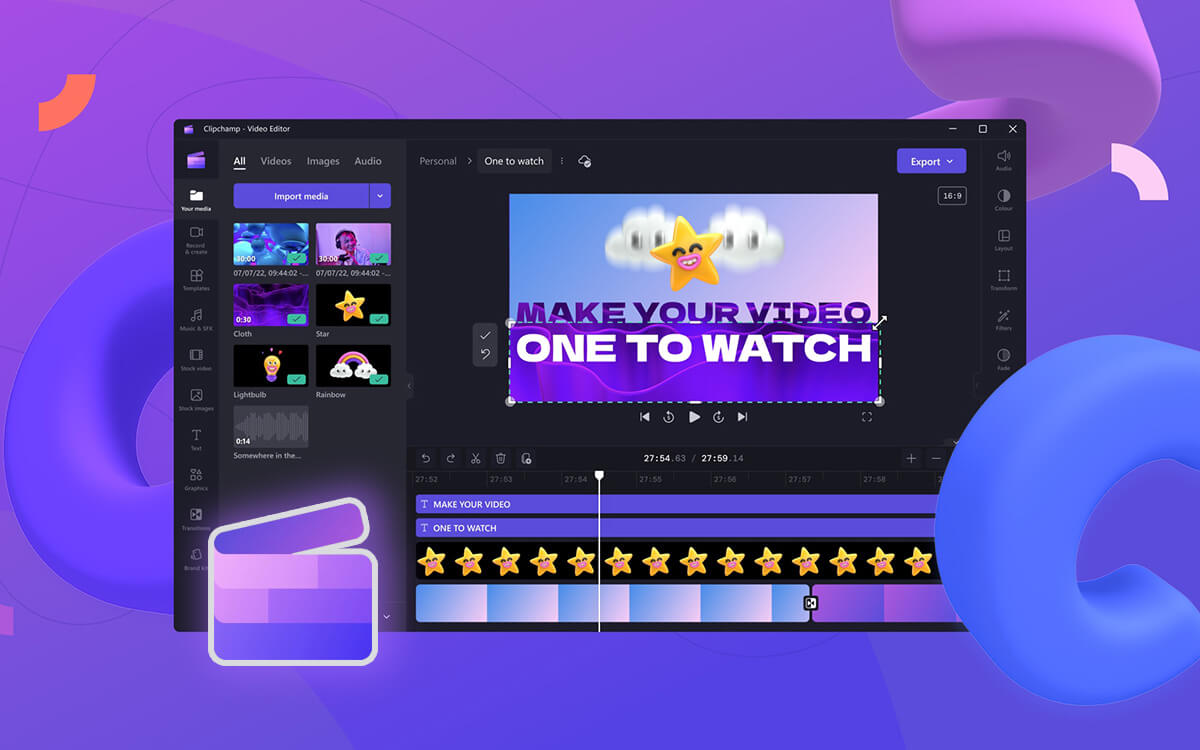 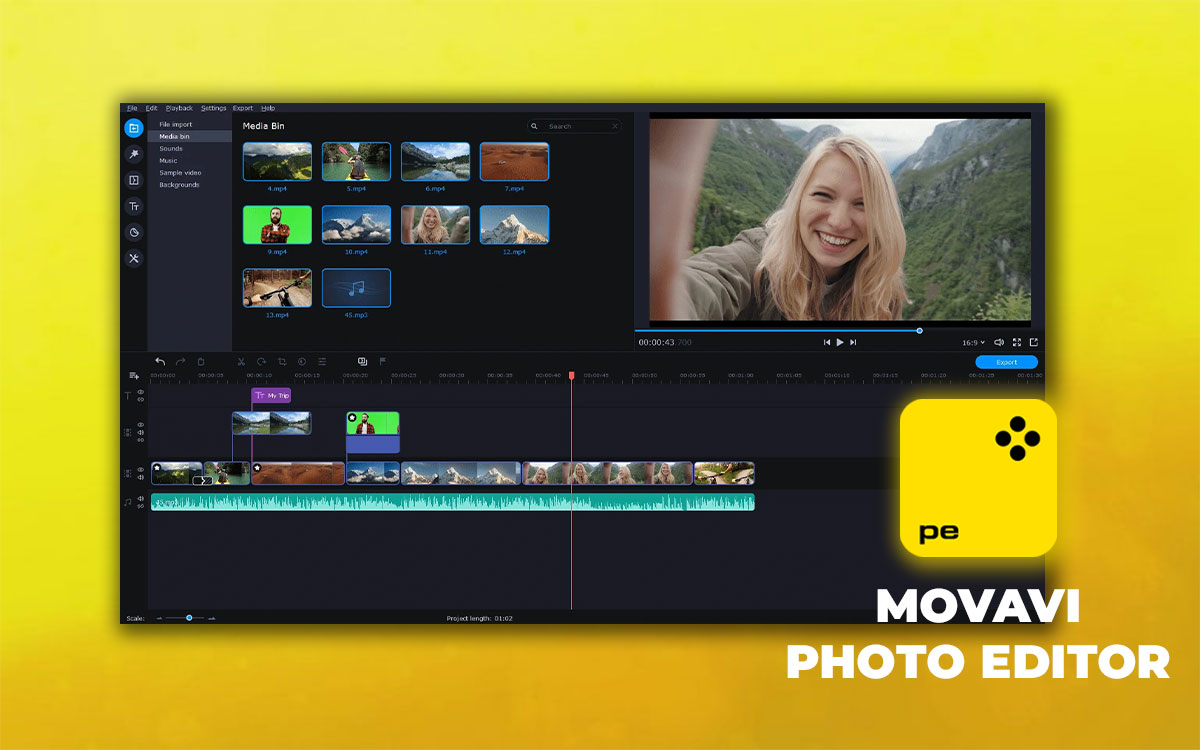